Eagle focuses on the Ashtanga Yoga system, which he has experienced to hold a vibrant universal key to personal health, vitality and Self-knowledge. A dedicated student and practitioner first and foremost, Eagle committed a decade of annual immersive study trips to Mysore, India 2003–2012. A direct student of the late Ashtanga Yoga master Sri K. Pattabhi Jois and his grandson Sri R. Sharath Jois at the KPJ Ashtanga Yoga Institute (KPJAYI). Eagle has been ‘blessed’ by being “Authorized” by Sri K. Pattabhi Jois as well as Sri R. Sharath Jois to be an ‘Instructor’ of this method of Ashtanga Yoga. 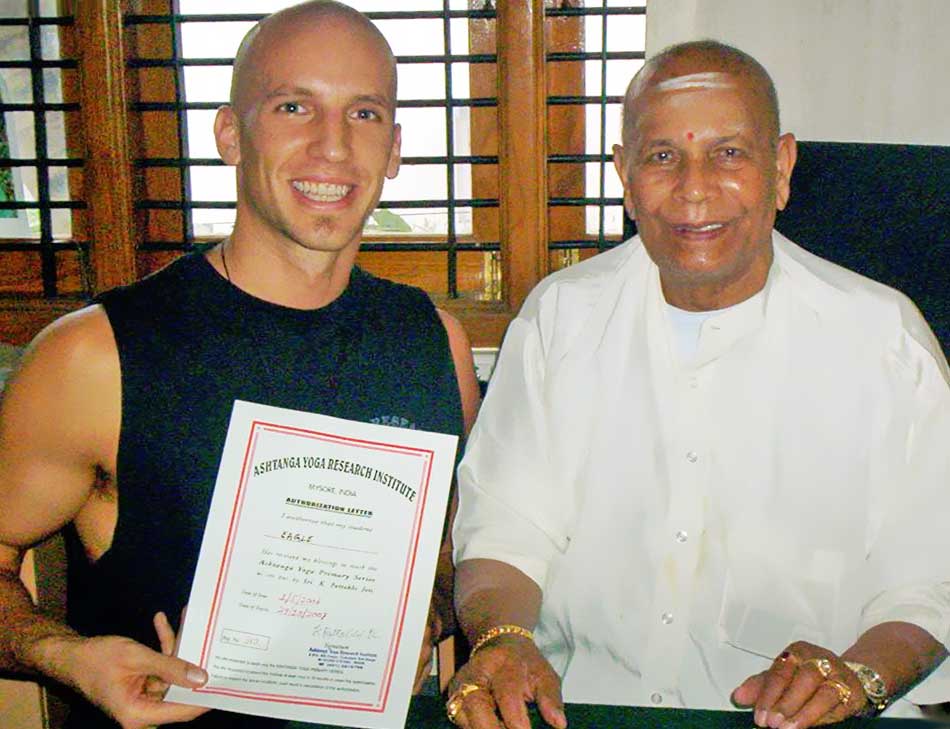 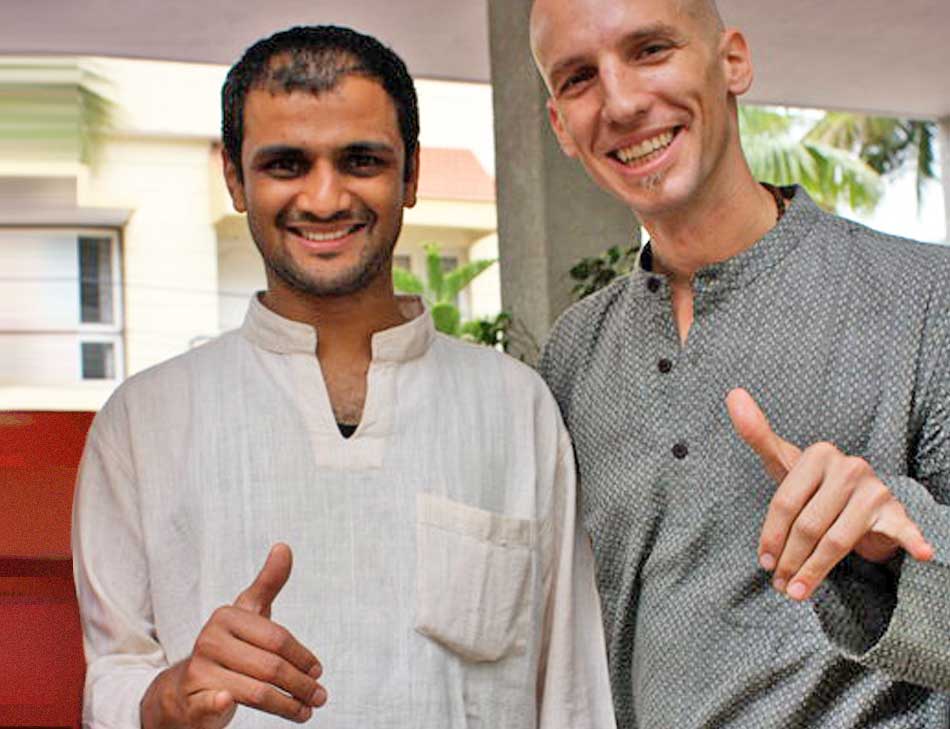 Life is a FUSION of Elements

Over the past 25 plus years, Eagle has been concentrating his focus on the various methods and practices that have allowed for his personal healing to unfold effectively. These various focuses or “Elements” as he refers to them are: Ashtanga Yoga, Meditation, Vegan (compassion), Visualization, Healing and Affirmations. This FUSION ELEMENTS presentation along with Eagle’s time, love and intention are shared in a direct and simple manner to help guide you back into balance.  Discover the iPhone or iPad app or Computer Download. 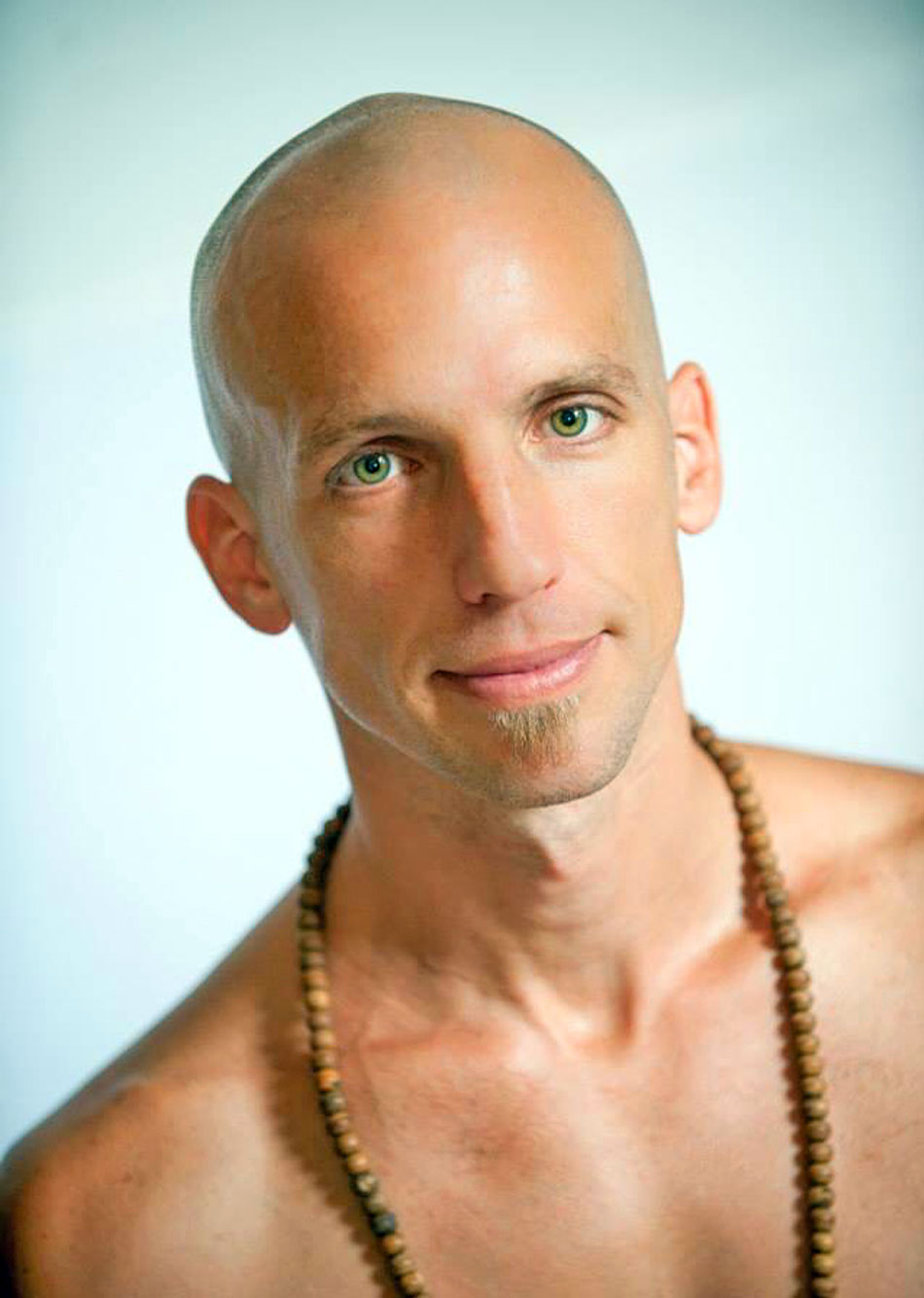 As a top ranking professional athlete, mind/body educator, personal trainer and “Authorized” Ashtanga Yoga instructor, Eagle has been expanding and evolving his physical and mental energies since early childhood.

In 1992, after Eagle won the Junior World Racquetball Championship titles in singles and doubles and was testing the waters on the Mens Professional International Racquetball Tour (irt-tour.com) a reckless driver ran a traffic light and spun Eagle’s vehicle and personal well being into turbulent chaos. Irreversible damage to Eagle’s lower spine necessitated extensive surgery, including a sacral fusion of the lower vertebrae.

The doctors told Eagle that he would never play sports again.

Through inconceivable pain, emotional turmoil and insurmountable odds, Eagle regained his personal integrity through what he now refers to as FUSION ELEMENTS, a broad tapestry of yoga asanas / postures, meditation, breathing, visualization, rhythmic entrainment / healing, vegan compassionate lifestyle and affirmation exercises. In the spring of 1994 after nearly two years of intensive recovery, Eagle made an unprecedented comeback into the extremely physical world of professional racquetball. He quickly attained a position on the United States National Racquetball Team and was ranked as one of the world’s top ten players.

The doctors were stunned by his remarkable recovery. 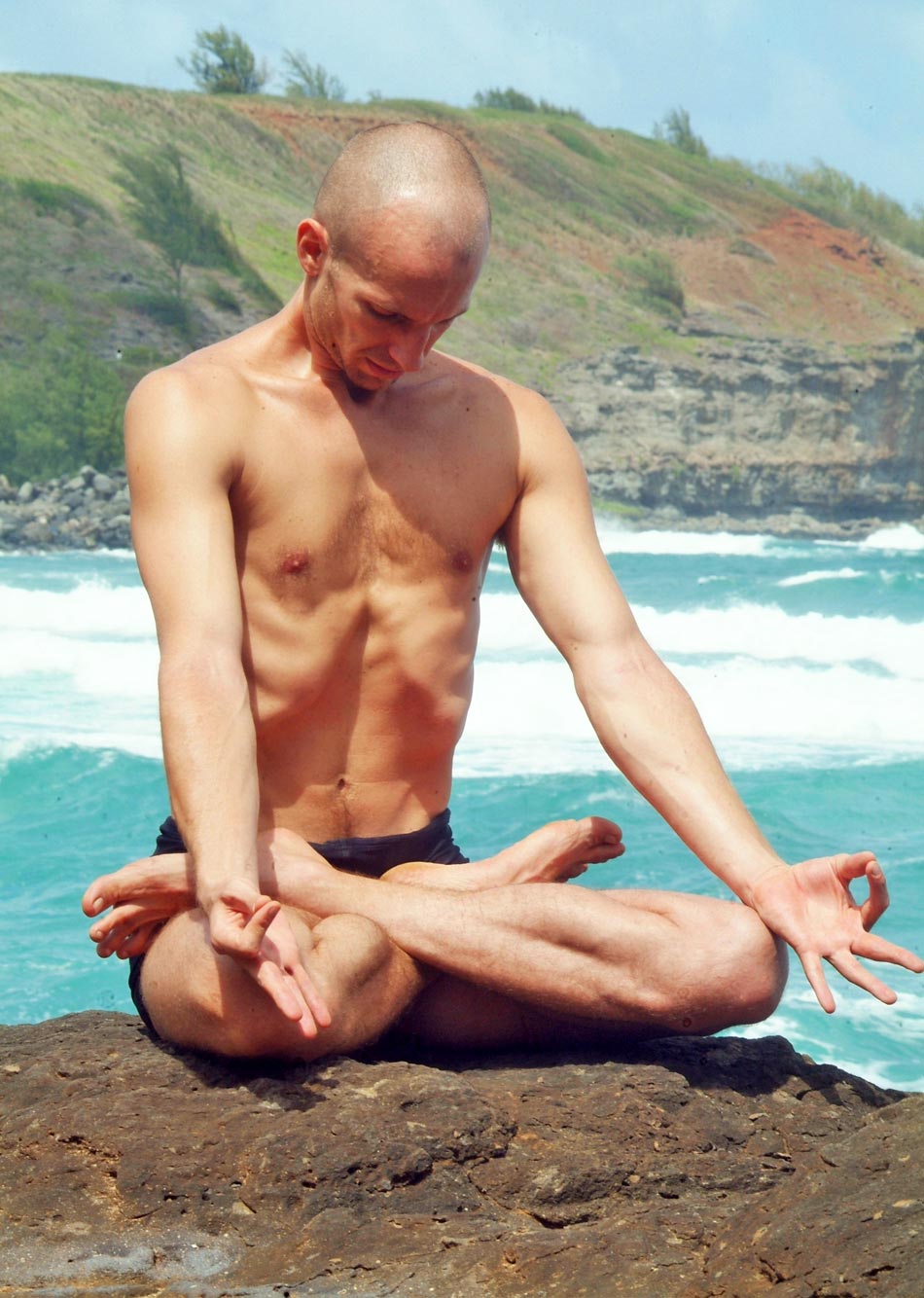 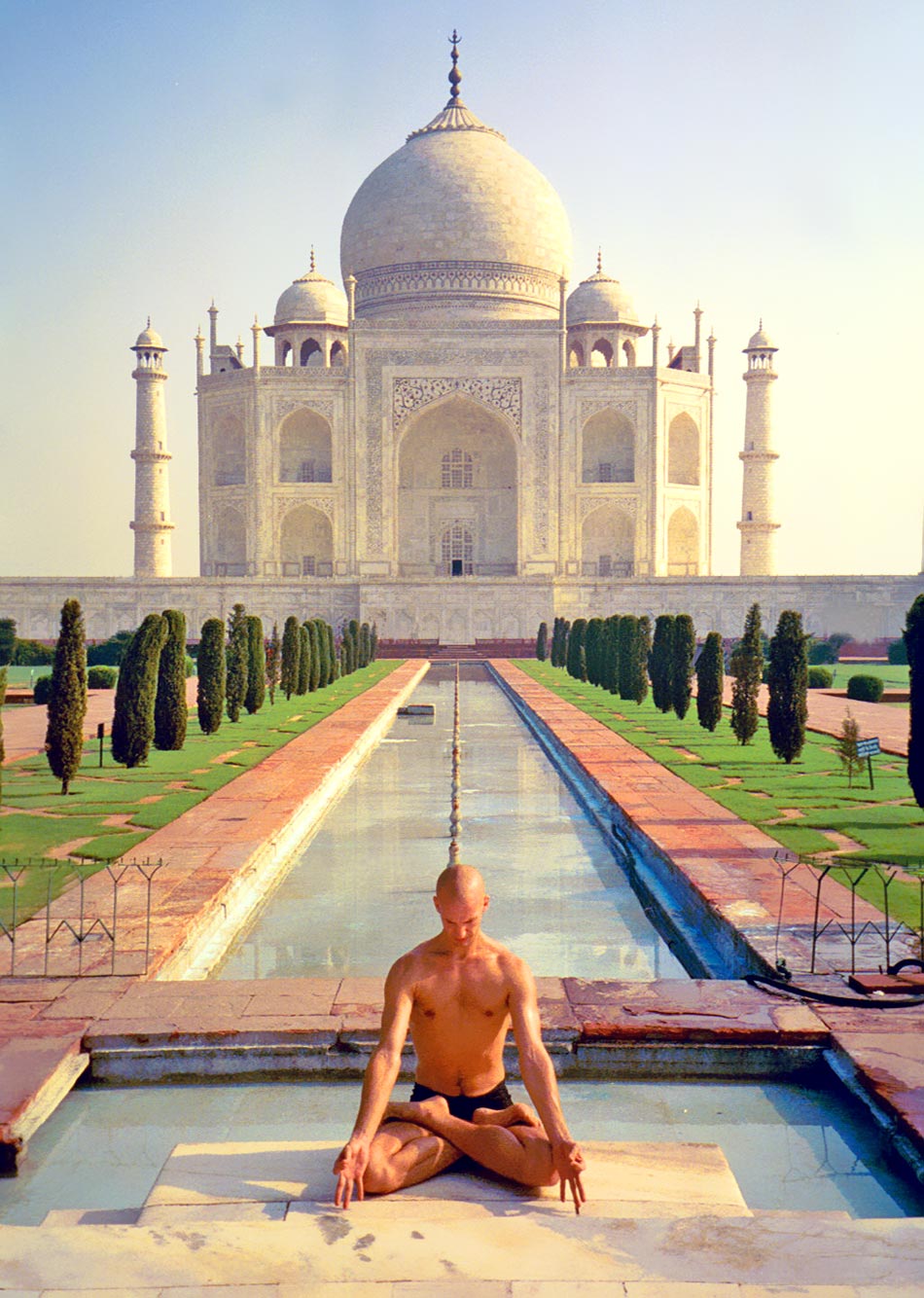 In 2001, Eagle retired from professional sports to devote himself to the study and teaching of the practices that made his recovery possible. Eagle embarked on an ambitious journey to seek out the preeminent living masters of the art and science of yoga. This search led him to India, the birthplace of yoga. Eagle spent multiple years of time during his 10 annual journeys to India from 2003–2012, training under the late great Sri K. Pattabhi Jois and Sri R. Sharath Jois at the KPJ Ashtanga Yoga Institute in the Southern Indian city called Mysore. 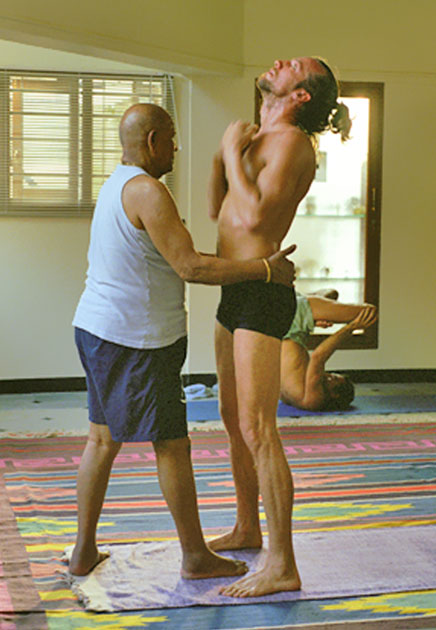 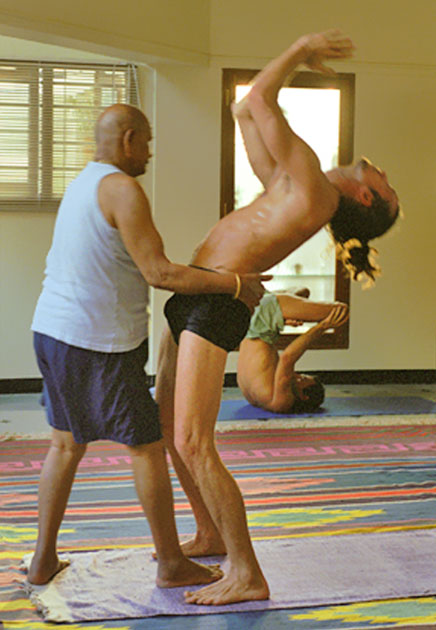 He continued to study with Sri R. Sharath Jois after the passing of Ashtanga Yoga Guru Sri K. Pattabhi Jois on May 18th, 2009. Sri R. Sharath Jois has been given the direction of the lineage and continues teaching the method as his grandfather taught him. Remaining a student of Yoga, Eagle was able to pay respect and study with T. Krishnamacharya’s esteemed students, his son T.K.V. Desikachar in Chennai, India and the legendary B.K.S Iyengar in Pune, India as well. Further yogic studies brought Eagle to attended The Bihar School of Yoga in Bihar, India, the Sivananda Yoga Ashram in Rishikesh, India, the Vipassana Meditation Centers in Kathmandu, Nepal and Dharmsala, India, the Osho Commune International also in Pune, India and took study to the Kriya Yoga system passed down through the lineage of Paramahansa Yogananda, author of ‘Autobiography of a Yogi’ in Dakshineswar, India outside Calcutta, India at the Self-Realization Fellowship.

Eagle’s living and training in India along with over 25 plus years of previous experience with a myriad of yogic paths, has established a firm foundation in living a yogic lifestyle. After extensively studying a broad range of styles, Eagle focuses on the Ashtanga Yoga system. 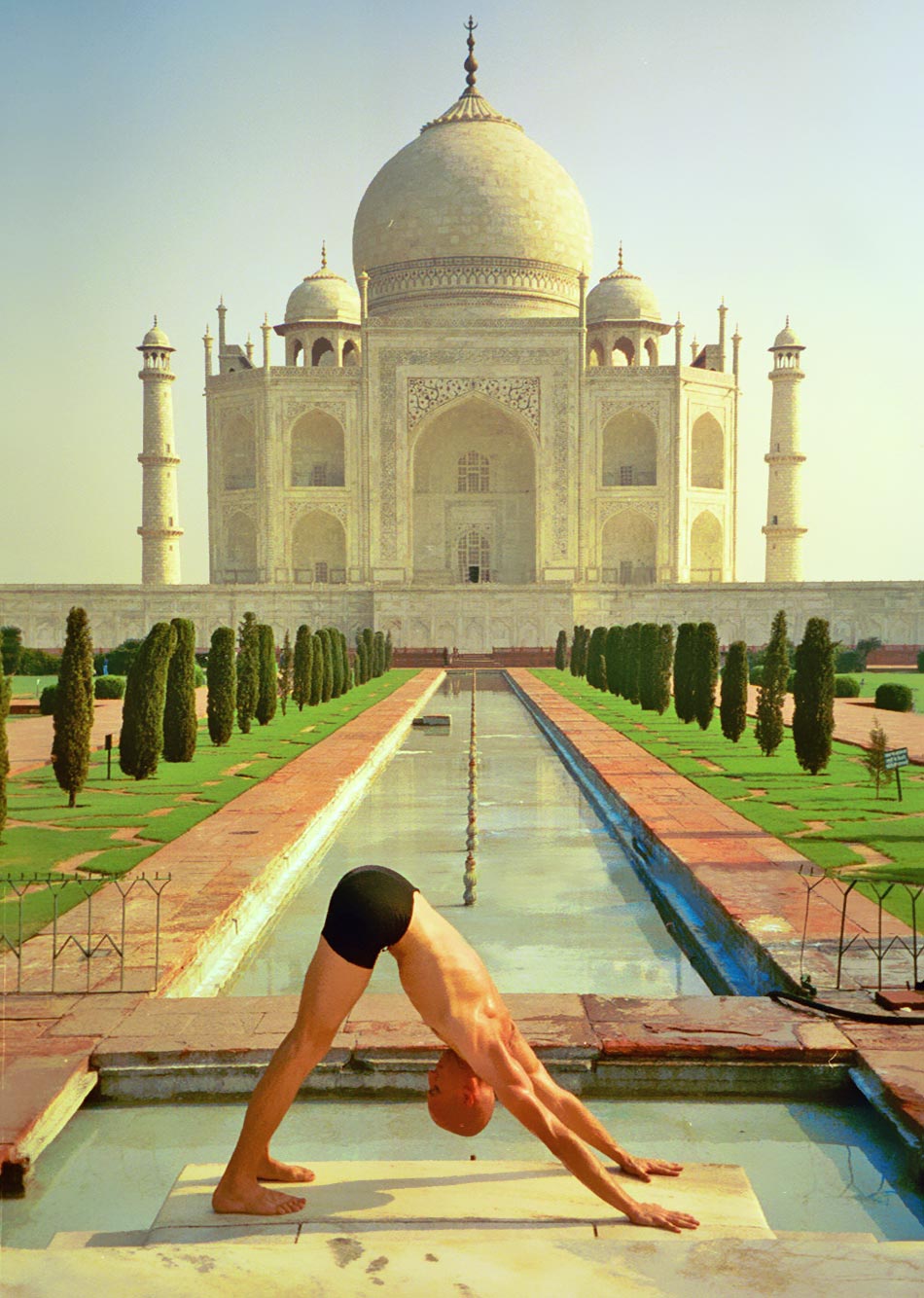 If we practice the science of yoga, which is useful to the entire human community and which yields happiness both here and hereafter – if we practice it without fail, we will then attain physical, mental and spiritual happiness, and our minds will flood towards the self.